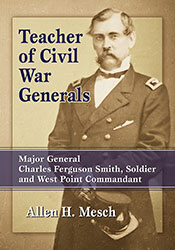 Buy the book at McFarland Publishers

Buy the book at Amazon

Charles Ferguson Smith (April 24, 1807 – April 25, 1862) was a career United States Army officer who served in the Mexican-American War and as a Union General in the American Civil War.

Teacher of Civil War Generals – From the training field at West Point to the entrenchments at Fort Donelson, Charles Ferguson Smith was the soldier’s soldier.  The call of duty was a magic sound for which he was always ready to make every sacrifice. He was the very model of a soldier, calm, prudent, self-poised, and bold. During his 40-year military career, these qualities earned him the respect and admiration of his peers.  However, his story is more than an account of battles fought and victories won. Through his correspondence, we discover a man who combined the qualities of a faithful officer, an excellent disciplinarian, an able commander, and a modest, courteous gentleman.

See the Table of Contents

I have a seventeen signed copies of Teacher of Civil War Generals: Major General Charles Ferguson Smith, Soldier and West Point Commandant available for purchase for $28.00 each including shipping. The curbside pickup price is $32.00. The Amazon price is $37.95.

Please contact me using the following form to receive ordering and personalization  instructions.