The following slides are from a presentation I gave to a luncheon meeting at First United Methodist Church of Plano on Thursday, March 15, 2018.

These slides deal with controversial issues of the Civil War. I have gathered information for these slides from a variety of sources. I wanted to present evidence and let you decide whether you chose to believe or refute my findings. 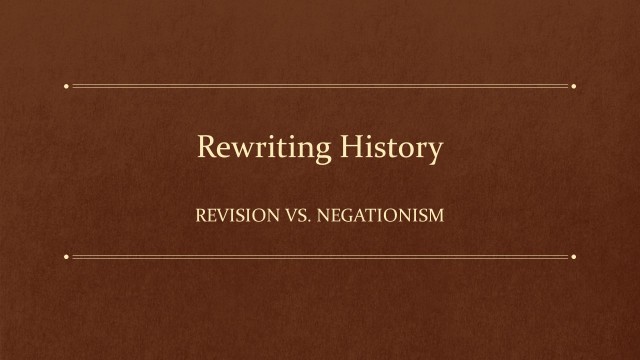 The slides deal with the following topics: “Lost Cause” of the Confederacy; Causes of the Civil War; Blacks Fought for the Confederacy; Slaves were Treated Well; White Supremacy; and Confederate Statues – Leave or Remove. 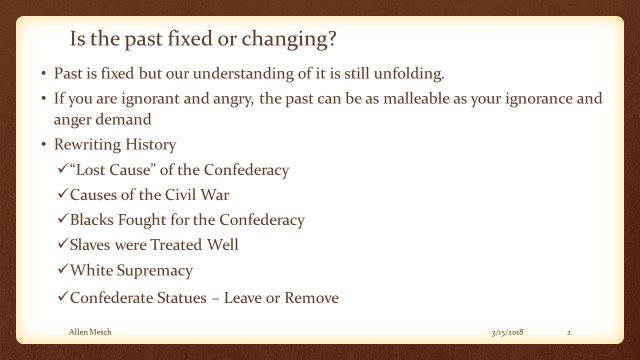 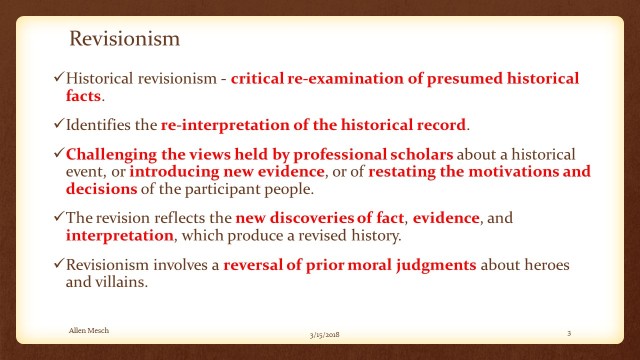 Information on the Civil War in Texas Textbooks.

What is the “Lost Cause of the Confederacy? 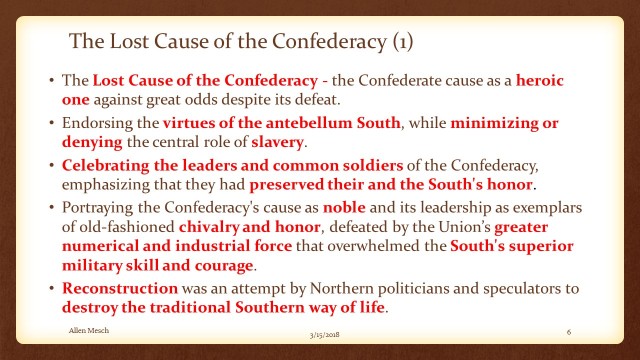 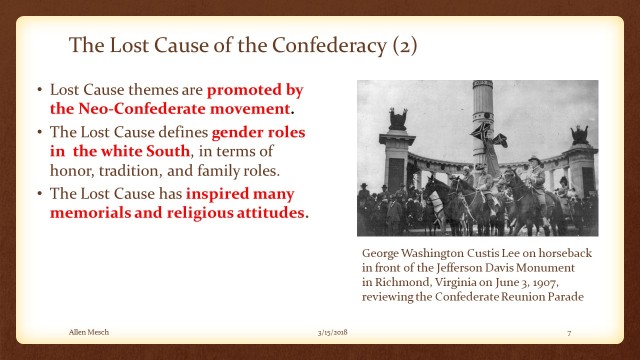 Historian Steven Woodworth criticizes the “history” presented in the movie Gods and Generals. 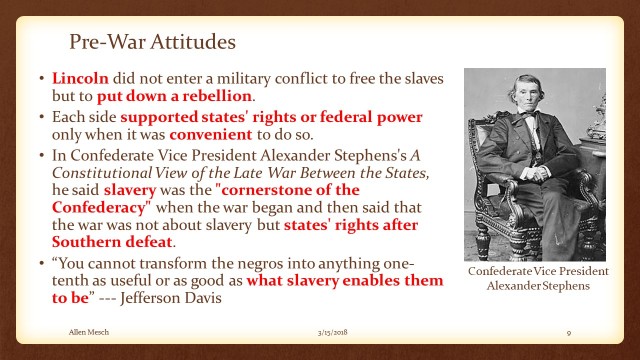 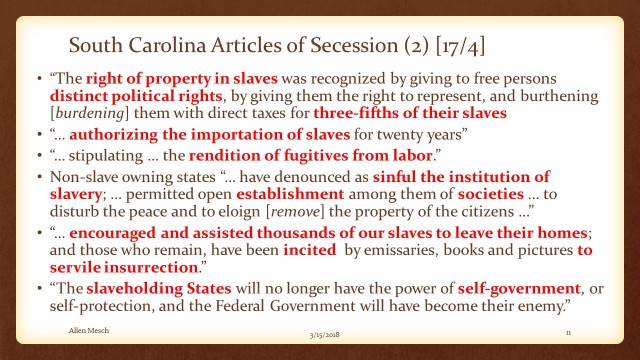 There are seventeen mentions of slavery and four statements about states’ rights in the South Carolina Articles of Secession.

In the eleven states recognized as being part of the Confederacy, there are 87 mentions of slavery and 20 mentions of states’ rights. Those states that seceded after the attack on Fort Sumter mentioned slavery once and states’ rights seven times.

Contrary to the idyllic life portrayed in some movies, the historical record reminds us that black slaves were treated as property and not human beings.

One of the most controversial topics concerns whether blacks fought for the Confederacy. The simple answer is “yes.” However, the real issue is how many were soldiers in the Confederate Army. In this regard there are broad definitions of soldiers that say if blacks performed duties that white soldiers could or did, they were soldiers. This perspective says that slaves who helped build defenses, cooked meals, and served as blacksmiths were soldiers. Arming blacks to fight with whites is quite a different consideration. Confederate and state laws forbid arming slaves.

Estimates of blacks fighting for the Confederacy range from several hundred to three thousand. I believe the number could go as high as 2,500 to 3,000. A very good article, “Yes, There were Black Confederates,” appeared in The Root in 2015.

Southern whites were afraid to arm blacks because they believed that the blacks might revolt and turn their weapons on slave owners. This concern was based on slave rebellions like Nat Turner’s revolt and others shown in the slide below.

Some historians have used altered pictures like the one below to indicate that there were armed black units. 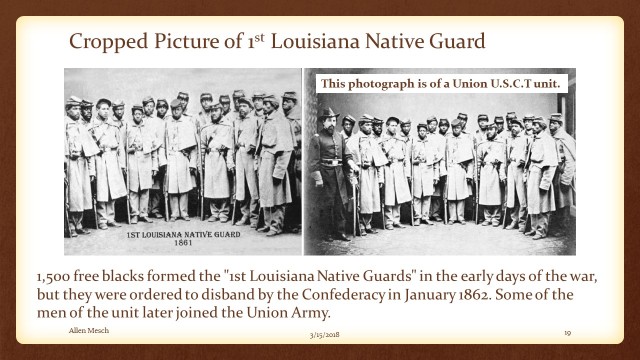 Holt Collier was a slave whose skills as a marksman and loyalty to his slave holding family made him a unique example of giving slaves guns. 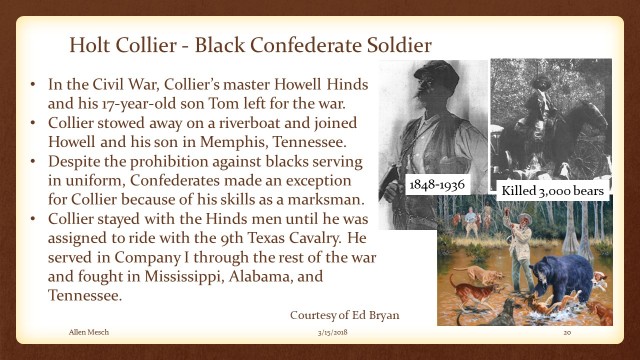 While most historians believe the South fought to maintain slavery, an extension of this belief says the Confederacy fought to maintain white supremacy. This view is supported by the actions of Southern states to reimpose slavery during Reconstruction through black laws and Jim Crow limitations.

There are several examples of this belief inscribed on monuments. 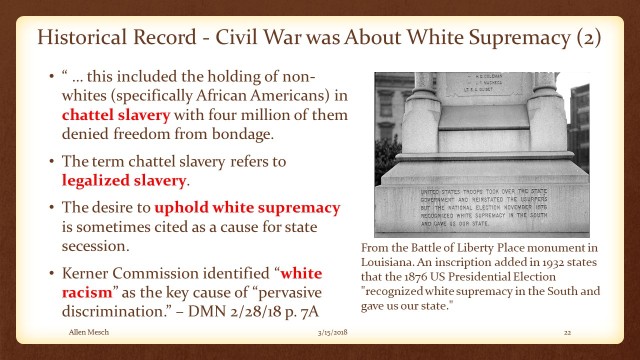 It should be pointed out that “white supremacy” has no geographic boundaries. There are “white supremists” in both the South and the North. 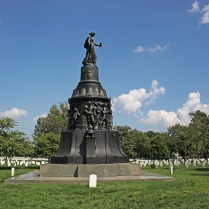 All of the above issues form the national debate about monuments Southern leaders who fought for a variety of reasons: protect the Southern slave-based economy, defend the wealth of plantation owners, maintain the status-quo of Southern society, and contest the idea that blacks were somehow equal to whites.

Most Americans want to statues to remain. Some say that the monuments honor men who wanted to destroy the Union and maintain slavery. They also argue that the values of two sides are not morally equivalent.

The monuments were placed during two periods of time: 1900-1918 (resurrection of white control and implementation of the “Lost Cause”) and 1963-1966 (in response to the Civil Rights Act, integration of schools, and busing).

Today, Southern Monuments are evaluated from either “preserving history” or as a “symbol of white supremacy.”

It is left to you, the reader, to evaluate the evidence presented, decide what you believe/agree with, and how this evidence impacts your decisions on removing or keeping Confederate Monuments.

I would like to retain the monuments, add other monuments to the home front and explain why the community decided to erect them. The monuments need to include description of slavery and its economic role in the South. I would also like markers to explain the steps in Civil Rights and emphasize the role that black soldiers played in ending the war and how this was a first step in the ongoing struggle of black equality.
Ultimately, the status of monuments and other symbols of the Confederacy is a local issue that should be decided by the community which is home to the monument.