Writers and the First Amendment

There is a reason America’s Founding Fathers placed the freedoms guaranteed in the First Amendment ahead of other amendments in the Bill of Rights.

Congress shall make no law respecting an establishment of religion, or prohibiting the free exercise thereof; or abridging the freedom of speech, or of the press; or the right of the people peaceably to assemble, and to petition the government for a redress of grievances. 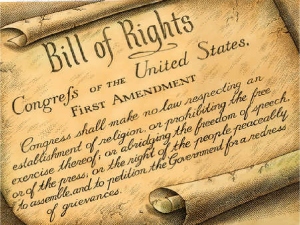 The First Amendment guarantees freedoms concerning religion, expression, assembly, and the right to petition.  It forbids Congress from both promoting one religion over others and also restricting an individual’s religious practices.  It guarantees freedom of expression by prohibiting Congress from restricting the press or the rights of individuals to speak freely.  It also guarantees the right of citizens to assemble peaceably and to petition their government.

Today, threats to our democracy make enforcing the First Amendment rights more important than ever.

As writers, the First Amendment guarantees freedom of speech and the press. This allows us to compose political and societal fiction and include our opinions in non-fiction works. Freedom of the press allows us to publish portions of our books and write articles based on these books. This press freedom permits us to be interviewed by the media about our books and/or the subject matter.

Consider how impossible it would be to write without these rights. Could we author inspirational and spiritual works, self-help guides, fiction and non-fiction histories and biographies, how-to manuals, and social commentaries?

During the 1st Congress, Madison led efforts to pass several constitutional amendments that would form the United States Bill of Rights. Madison hoped to protect individual liberties against the actions of the federal government and state legislatures. He believed listing the specific rights would fix those rights in the public mind and encourage judges to protect them. After studying over two hundred amendments that were proposed at the state ratifying conventions, Madison introduced the Bill of Rights on June 8, 1789. His amendments contained numerous restrictions on the federal government and protected freedom of religion, freedom of speech, and the right to peaceful assembly.

Allen is an author, educator, and historian. He has written five books: The Analyst; Teacher of Civil War Generals; Your Affectionate Father, Charles F. Smith; Charles A. Marvin - "One Year. Six Months, and Eleven Days", and Preparing for Disunion. Allen's latest book, Ebenezer Allen - Statesman, Entrepreneur, and Spy is scheduled for release in August 2020. He teaches classes on the American Civil War at Collin College. He has visited more than 130 Civil War sites and shares his over 4,000 photographs on Civil-War-Journeys.org. He blogs about the Civil War on Salient Points.
View all posts by Allen Mesch →
This entry was posted in Scratch Pad and tagged First Amendment, James Madison. Bookmark the permalink.