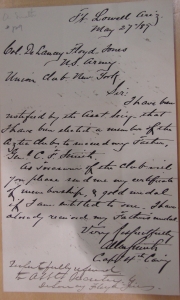 Letter from Allen Smith about membership in the Aztec Club

Yesterday I was contacted by one  of General Smith’s descendants who lives in Portland, OR. He informed me that he had discovered a number of documents that dealt with Charles and Allen Smith. We visited on the phone and he was excited to share this information with me.  Later that day, he emailed me that his uncle had an extensive collection of Smith memorabilia. These two discoveries will add to the public’s knowledge of General Smith and shed new light on the life of General Allen Smith and his family. I hope to be able to incorporate this information in my new book, Your Affectionate Father, Charles F. Smith.

Allen is an author, educator, and historian. He has written five books: The Analyst; Teacher of Civil War Generals; Your Affectionate Father, Charles F. Smith; Charles A. Marvin - "One Year. Six Months, and Eleven Days", and Preparing for Disunion. Allen's latest book, Ebenezer Allen - Statesman, Entrepreneur, and Spy is scheduled for release in August 2020. He teaches classes on the American Civil War at Collin College. He has visited more than 130 Civil War sites and shares his over 4,000 photographs on Civil-War-Journeys.org. He blogs about the Civil War on Salient Points.
View all posts by Allen Mesch →
This entry was posted in Scratch Pad and tagged Charles F. Smith. Bookmark the permalink.