The Devil is in the Details 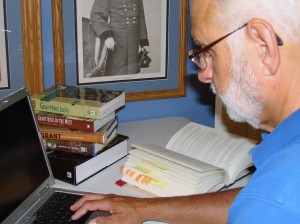 A reader commented on the detail in Teacher of Civil War Generals and observed that some parts of the book contained daily narratives. The detail in this book or any other is driven by the time frame of the story. For example, General Smith’s actions at the Battle of Fort Donelson cover about five days. The importance of this battle in Smith’s life demands a detailed rendering. This is especially true on the afternoon of February 15, when he led the attack on the Confederate defenses.

Allen conducting research at the US Army Heritage and Education Center in Carlisle, PA

Other details are often included to reflect journal entries and reports. I used this detail in Teacher of Civil War Generals and Your Affectionate Father, Charles F. Smith when describing Smith’s expedition to the Red River of the North. The detail helps bring the story to life and highlights the daily hardships experienced by the men of the Tenth Infantry Regiment.

The last reason I include detail is to provide information for other historians who might be interested in certain parts of the book. This is especially true when using previously unpublished letters and journals.

Allen is a author, educator, and historian. He has written four books: The Analyst; Teacher of Civil War Generals; Your Affectionate Father, Charles F. Smith; Charles A. Marvin - "One Year. Six Months, and Eleven Days", and Preparing for Disunion. He teaches classes on the American Civil War at Collin College. He has visited more than 130 Civil War sites and shares his over 4,000 photographs on Civil-War-Journeys.org. He blogs about the Civil War on Salient Points.
View all posts by Allen Mesch →
This entry was posted in Scratch Pad. Bookmark the permalink.