A Question from David

Last week, my grandson David asked me why I didn’t get more questions even though I travel “everywhere.” That’s a good question. 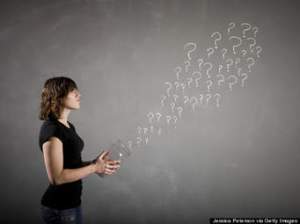 People ask questions to learn new things and obtain answers. Some folks want to have their beliefs validated or opposing arguments defeated. So there are often motives behind the question. This means that people are often reluctant to ask questions because they suspect they won’t like the answer. People who ask questions like, “Can I stay out late?” “Is dog food a deductible expense?”  “Can I wear jeans to the wedding?” usually know the answer. Another reason for not asking questions is that people believe they know the response based on the beliefs held by the person they are asking the question. This fellow lives in Texas so he must believe in what the majority of Texans hold dear.

Another reason that I don’t get more questions has to do with exposure. The more people who you know and more who know you and your public presence, the more likely you are sought for advice and answers.

However, as David noted “at least you don’t have to worry about answering them.” I used to have email links on my websites for questions. Some people wanted to get free consulting advice or free access to data that I had painstakingly obtained. I received questions from my Civil War site from students needing help with their homework. Many of these questions could be answered by consulting pages on my website or other Civil War sites. When the question was something beyond the “garden variety,” I tried to help them with an answer. If the question was interesting to me, I might do some research myself and share the results.

Some folks champion the belief that “ignorance is bliss” and refuse to question a statement or check facts. Politicians are  skilled at distorting data to suit their agenda and hoping no one takes the time to check the facts. Other people are so entrenched in their beliefs that they refuse to consider any ideas that challenge these beliefs.

Knowledge is a strange commodity. It is all around us. All we have to do is use our senses and open our mind. Keep asking and learning young Jedi.

Allen is an author, educator, and historian. He has written six books: The Analyst; Teacher of Civil War Generals; Your Affectionate Father, Charles F. Smith; Charles A. Marvin - "One Year. Six Months, and Eleven Days", Preparing for Disunion, and Ebenezer Allen - Statesman, Entrepreneur, and Spy. He taught classes on the American Civil War at Collin College. He has visited more than 130 Civil War sites and given presentations at Civil War Roundtables.
View all posts by Allen Mesch →
This entry was posted in Scratch Pad and tagged Questions. Bookmark the permalink.