I am pleased to announce that Preparing for Disunion – West Point Commandants and the Training of Civil War Leaders is now available from McFarland Publishers, Inc. and Amazon.

Between 1817 and 1864, sixteen officers were assigned as Commandant of Cadets at the U.S. Military Academy. They played an important role in training the officers who would serve as senior commanders in both Union and Confederate armies during the Civil War. Six former commandants also served as general officers in the Civil War – Maj. Gen. Ethan Allen Hitchcock, Maj. Gen. Charles F. Smith, and Maj. Gen. John F. Reynolds for the U.S. Volunteers and Lt. Gen. William J. Hardee, Maj. Gen. William H. T. Walker Major, and Brig. Gen. Robert S. Garnett in the Confederate States Army.

Historians criticize the West Point military program as antiquated for its time – a course in Napoleonic strategy and tactics that failed to account for the advent of rifled weapons or the scope and terrain of the Civil War battlefield. Yet these commandants made changes to the program, developed new textbooks, and instructed many cadets who became field generals during the Civil War.

Preparing for Disunion presents the commandants’ biographies, their significant contributions to the military instruction, and the notable cadets they trained in drill on the West Point plain and in the military academy classroom.

Preparing for Disunion is available from McFarland Publishers, Inc. and Amazon.

This book would make a great gift for former, current, and future West Point cadets, students of the Civil War, and military history scholars. 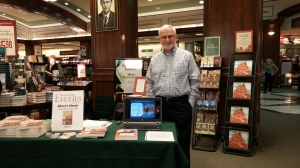 Allen is a author, educator, and historian. He has written four books: The Analyst; Teacher of Civil War Generals; Your Affectionate Father, Charles F. Smith; Charles A. Marvin - "One Year. Six Months, and Eleven Days", and Preparing for Disunion. He teaches classes on the American Civil War at Collin College. He has visited more than 130 Civil War sites and shares his over 4,000 photographs on Civil-War-Journeys.org. He blogs about the Civil War on Salient Points.
View all posts by Allen Mesch →
This entry was posted in Scratch Pad and tagged Commandants of Cadets, Preparing for Disunion, US Military Academy, West Point. Bookmark the permalink.